As you all know the footfall across the common has increased substantially. We estimate numbers to be up between 200-300% above average. This puts a lot of pressure on certain areas of the common and specifically certain habitats. One of the habitats that is coming under immense pressure from footfall and cycling is our Lowland Acid Grassland (LAG), in particular the areas around Mill Hill and the ‘Up’s and Downs’ by Rocks Lane. Pictures do a much better job of showing this. The spot is the ‘Up’s and Downs’ and the first picture is 2016. The second is May 2020. As you can see there is a lot more exposed, bare ground and a lot less plant (and insect) life!

Most of the reactions we receive when we explain the importance of this type of grassland is of surprise and bemusement. So, below is a little rundown and background to just how important it is and what you can do to help our rare grassland.

What is acid grassland?

Acid grassland is the sward that develops over acidic soils. These acidic soils are derived from the underlying sands and gravel and are free draining and have low nutrient availability within the soil. This  soil composition means that a  number of specialised plants are capable of growing on these poor-quality soils.  Unfortunately, unlike other grasslands acid grasslands does not produce a tall, eye-catching colourful display of wildflowers that often springs to mind when most people imagine wildflowers. However, armed with a little knowledge, the beauty and importance of this habitat can easily be appreciated.

The sea of red that can still be seen in areas of LAG on the common, such as on parts that surround Mill Hill is the Sheep’s sorrel (Rumex acetosella). The beautiful yellow flowers that are dotted amongst it are the Cat-ears (Hypochaeris radicata) and those that are lemon yellow in colour, with fine black hairs on the stem and sepals are the Mouse-ear Hawkweed (Pilosella officinarum).

Why is it important?

LAG is a habitat of national conservation importance. As well as supporting an array of distinctive plants the acid grasslands of greater London, Kent and Essex are host to a unique community of spiders, bees and wasps, ants, beetles, bugs and flies known collectively as the Thames Terrace Invertebrates, which is one of the most important and threatened invertebrate assemblages in Britain!1. The light sandy soils are perfect for hole-nesting bees and wasps, such as the Beewolf (Philanthus Triangulum) which can frequently be found on the LAG across the common. Later on in the year the common has been home to hundreds of Ivy mining bees (Colletes hederae) who coincide their emergence with the flowering of Ivy. Keep your eye out at the moment for the small copper butterfly (Lycaena phlaeas)  who’s caterpillar relies on sheep’s sorrel as a food source.

One of the spiders found in the acid grassland on the common (Steatoda phalerata) was the first record of the species in greater London in 2010.  To go one better, in 2017 a new gall wasp species, (Alloxysta pseudoconsobrina) was described based on a specimen collected from Barnes Common, and is currently housed at the British Museum of Natural History! 2

If you’re wondering what all the mounds are that can be found in the LAG then these are yellow meadow ant hills. Their mounds alone can create microhabitats for certain plants3. They also provide a window into the past and how long an area has been undisturbed. It has been estimated, by a prominent grassland ecologist, that some of the ant hills on Barnes Common are 150-200 years old – not what you would expect for an urban nature reserve!

This is just a handful of the insects that use our acid grassland, relying on the plants that grow on it as well as the sandy soil beneath.

What can we do to help protect the acid grassland?

Sticking to the paths and not cycling and walking directly across parts of the sandy soils will make a huge difference. You’ll avoid crushing the homes of all the insects that are trying to burrow into the soil beneath and give the plants a chance to recolonise.

Barnes Common was described as having some of the best acid grassland in London and with your help, we can keep it that way!

Monday with Mike: Shrubs on the Common

Trees not so common on the Common: Beech, Hornbeam, Alder 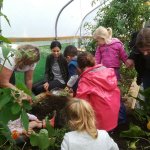 © 2020 All Rights Reserved. Friends of Barnes Common Site by Overbord
We use cookies to ensure that we give you the best experience on our website. If you continue to use this site we will assume that you are happy with it.OkPrivacy policy